6 horses had to be RE-inspected. For me it was even hard to imagine how to cope with such a situation. I think quiet some people probably did not sleep very well. As you can see on the picture there was a great interest and everybody seemed to be there by 7:30 in the morning.

Sadly for the Italian and Sarah Morganti, her horse was not accepted and therefore for her this competition was over before it even started. 😭 All the others were accepted!

Changed into my official outfit and for the first time ever I was ON THE OTHER SIDE! No horse to take care of, no team to be with and to care for, but still I feel good being within my Para-Equestrian Family.  My duty is to bring the athletes after their rides to the mixed zone to talk to the media. It was interesting and knew for me to see all their emotions and how they would dismount. I tried to stand back and find the right time to ask them to follow me. Altogether I think it went very smoothly even though we had a couple of issues, such as fireworks during the Grade III class in the morning. There was a soccer tournament on its way and for each goal there were fireworks shot in the air, scaring some horses and I had the impression especially the riders. They did everything they could, sent the military there one they had discovered were it came from. After explanations, there were no fireworks heard after. 😂

Great big thank you goes to the Brazilian audience. First of all, there were way more spectators than I had imagined. Second the audience understood immediately when to clap and was cheering on every athlete👍🙌, when there was an Brazilian athlete they just went hilarious!

It was a long and hot day with our outfit, but happy that it went all so well!

Results can be found here: 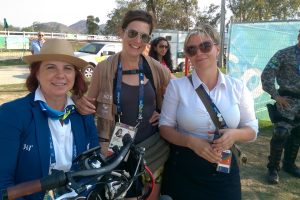 "It's ABILITY, not DISABILITY that Counts !"